Here’s a new release of Plop! reader, an application allowing you to read entries from your Wallabag v2 instance, on your Pocketbook Touch Lux.

This is still an early version, which means your feedback is important!

With previous versions of this application, it would only download an HTML version of each entry; and this HTML version doesn’t contain rich content like images.

Starting from v0.3.0, the application will download an EPUB version of each entry from your wallabag server, provided it supports export of entries as EPUB – which means you need wallabag >= 2.2 – not yet released!

If you are still using an older version of wallabag, Plop! reader will not try to download EPUB version of each entries and will keep working like before.

Here are a few screenshots: first, reading the EPUB version of an entry which includes an image: 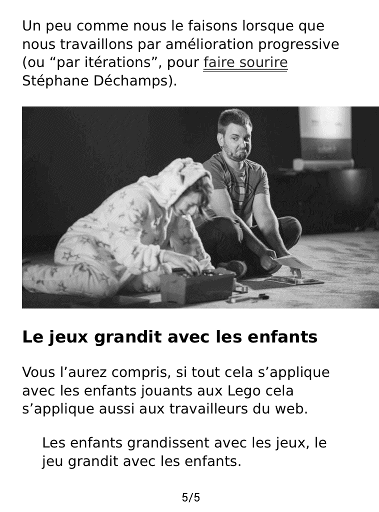 If the EPUB cannot be read (it happens, some entries are not exported properly by the server), you can long-touch an entry. You’ll then get a context-menu in which you’ll be able to choose between the HTML and the EPUB versions of the entry (the HTML might be better in some cases): 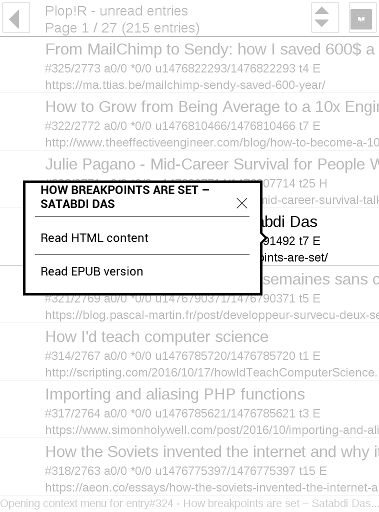 For now, to speed sync up, the EPUB version of an entry is only downloaded when the entry is synced from the server for the first time and only for entries that are unread or starred: it’s never updated later on the ereader. This might (or might not) change in the future, depending on feedback.

Also, for now, EPUB files are downloaded synchronously while syncing – which means the synchronization process can take a bit of time (several minutes if you are fetching a lot of entries, like on first sync!). This will probably be enhanced in the future, downloading EPUB files in the background (see #57) or with several downloads in parralel. 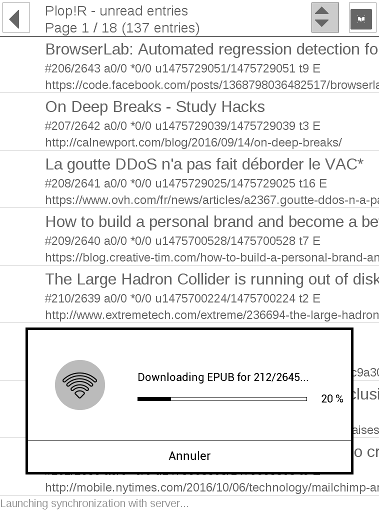 This project is open-source, under GPL-3.0. Sources are on Github: pmartin/plop-reader.
If you are curious about what might come next, take a look at my current roadmap.