Here’s a new release of Plop! reader, an application allowing you to read entries from your Wallabag v2 instance, on your Pocketbook / TEA Touch Lux 3.

This is still an early version, which means your feedback is important!

Starting from v0.3.0, this application downloads an EPUB version of each entry from your wallabag server, provided it supports export of entries as EPUB – which means you need wallabag >= 2.2 – released a few days ago! I’ve also had reports indicating it works with wallabag.it.

With v0.3.1, several EPUB files are downloaded in parallel, which means synchronization should go much faster than before: 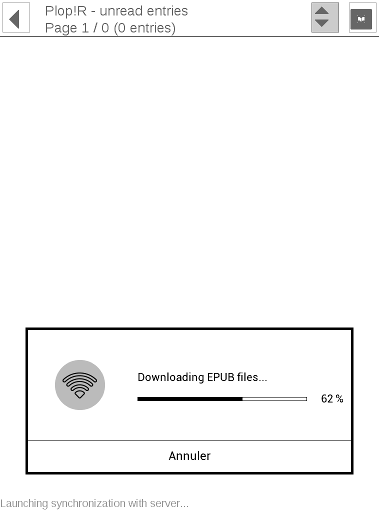 Note: to speed sync up even more, the EPUB version of an entry is only downloaded when the entry is synced from the server for the first time and only for entries that are unread or starred: it’s never updated later on the ereader. This might (or might not) change in the future, depending on feedback.

This v0.3.1 also adds a Delete all local data item in the context-menu of the application: 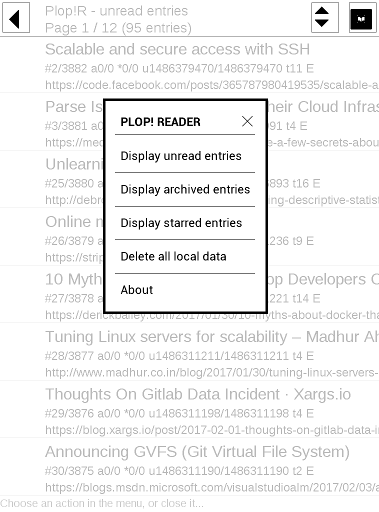 After touching this item, you’ll be asked to confirm:

If you confirm in this dialog, all local data (and only data local to your ereader) will be deleted (nothing will be changed on the server-side), including all changes you might have done on the ereader and not synchronized to the server yet.

This feature should only be used if you encounter some strange behavior within the application – especially if there is a bug that causes synchronization to fail (don’t forget to report the bug ;-) )

This project is open-source, under GPL-3.0. Sources are on Github: pmartin/plop-reader.
If you are curious about what might come next, take a look at my current roadmap.